Cats get Valley Fever, though it is diagnosed much less frequently than in dogs.

We estimate that there is 1 cat case for every 50 dog cases. Diagnosis strategies are similar to dogs, and the same medications are used for treatment. While a great deal of the information for dogs applies to cats, there are several ways in which Valley Fever in cats differs.

Non-healing skin lesions are the most common symptom of Valley Fever in cats,

rather than coughing and lameness as in dogs. The lesions may look like abscesses, draining tracts, or dermatitis. They can occur in almost any site and usually ooze a pale yellow to reddish fluid.

Symptoms in cats may be as vague as unexplained weight loss, but can also include lack of appetite, fever,

lack of activity, rapid or difficult breathing, coughing, limping, or changes in behavior.

Cats are often sicker than dogs at the time of diagnosis.

They seem to hide illness well until it is advanced. 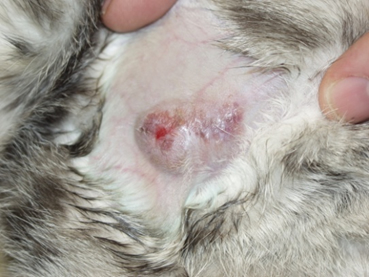 Biopsy of non-healing skin lesions is a very common way the disease is diagnosed in cats.

The Valley Fever blood test is used in cats just as it is in dogs. However, the veterinarian needs to have a suspicion of the disease to order the test.

Chest x-rays are worthwhile in cats that aren't coughing but are suspected to have Valley Fever.

A large, round lesion to the left of the heart is compressing 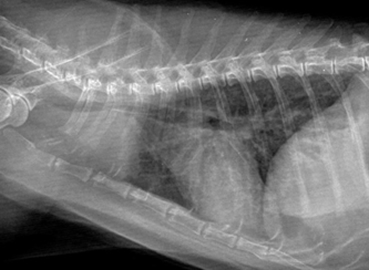 The antifungal medications that are used to treat Valley Fever in cats are the same ones used in dogs.

There is less known about adverse effects in cats, except that literature reports that their livers are more sensitive to ketoconazole, and clinical experience reported suggests that they can tolerate high doses of fluconazole. Sporanox liquid is a good choice in cats that need this medication and it should be administered on an empty stomach.

Cats that have severe appetite suppression

from Valley Fever or from the medication will benefit from surgical placement of a feeding tube so they do not develop fatty liver disease.

and their livers have a hard time coping with many things. It is recommended that no herbs or supplements be given to cats without the guidance of a veterinarian.